From being a school leaver to having a main role within the company, the transition has not only been enormous but both testing and fun! – I wouldn’t want it any other way.

Leaving school and going into further education seemed to be a difficult transition, you had those teachers that wanted me to stay at sixth-form in order to make them look good, and then you had those that suggested you go to college and take up a subject of your choice.

I opted for neither, I was looking around for Apprenticeships / Jobs to accommodate, what I thought was my next step.

I hadn’t had any luck. By chance I was then talking to someone who was a mutual friend of Ryan’s (My Director), she is the public relations manager at Discovery Park, Kimberley Anderson.

Kimberley assisted me in getting in-touch with Ryan and accompanied me to my first meeting with him, based on the conversation Ryan and I had that day, he then offered me a further meeting, more of an interview this time.

I went away and began preparing my portfolio, plan of action and a few discussion points, I had come up with a few points to discuss and tried to find out as much information as I could about Ryan.

As I was applying for a Jr. Web Developer role within the company, I thought it may be best to create my portfolio in the form of a website, for which I did, I had some video and sound integration to show off some of my skills, – I still didn’t think it would stand out.

So I dug a little deeper, as I began to research the company, I found out some rather useful information about Ryan, he was once in exactly the same position I was!

We had both left school with grades which weren’t so high, he was given a chance at his age when struggling to find a way out after school by Concept Advertising which led to getting a job with McCann Erickson – A global advertising agency!

I thought to myself, how can this be of any use to me? I edited my website to then play the song Pompeii by Bastille, right on the lyrics which go, “So if you close your eyes, does it almost feel like you’ve been here before….”

I was a little nervous about my interview and had no idea how it was going to go.

The day of the interview

I turned up to my interview in a polo shirt and shorts (I was advised to do this, as Ryan isn’t one to be completely dressed in suit and tie.) – Slightly misleading though, seeing as though he picked me up on how I was dressed – “It is always better to be overdressed than underdressed” which I will now always remember.

I began to talk through my portfolio (on the website) whilst at the same time flicking through my coursework from school and playing the song that I had put together!?

He must have thought I was so weird!

It was “An interview that I will never forget” according to Ryan, Director. It still got me one week’s trial though.

I had a task given to me to review, learn and then code my own website, in all honesty, I had no idea about any of the coding languages, I, however, learnt as much as I could as quick as I could and then built my website.

It wasn’t quite to the design, but it wasn’t far off in terms of my previous knowledge, none.

I was, in my opinion, used as a sponge, shoved into the company to see where I best fit and which pores I filled. It wasn’t until I began to do a mixture of Marketing and Project Management that Ryan realised my potential and where I would best fit within the business.

Jack tried increasingly hard in all aspects of his work and was able to demonstrate a high level of sophistication in all tasks set.

Where I am Now

I am now an Account Manager at Angle Studios, and I love my job! – Not many people can say that they go to a job every morning that they thoroughly enjoy… I thrive and improve after every piece of work I help to complete and each deadline I help to achieve.

I am involved in helping with all our projects and solely responsible for the projects which come through from our Angle Affordable range.

My career looks positive with Angle and I look forward to being M.D one day! 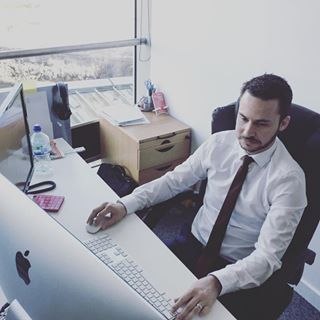